'Simple for children, too complicated for adults'.

Born in the United Sates in 1958, Keith Haring arrived in New York at the age of 18. Inspired by Graffiti tags on the streets and by the desert drawings of the Nazca peoples in Peru, he began his career realising large chalk drawings in the New York Underground. Eager to attract public attention, he painted and performed on the street, immersing himself in the realities of urban life. Hyperactive, he painted works in rapid succession and without an original sketch. He soon became the major star of Street Art and Pop culture.
Introduced to the East Village underground movement he befriended many contemporary artists such as his mentor Andy Warhol, also Kenny Scharf and Jean-Michel Basquiat. He participated in numerous performances at the Club 57 where he created his famous 'Radiant Baby'.
Rays of radiance emanate from crawling babies, together with a number of other pictograms such as his dolphins and androgynous figures, symbolising energy, joy and life. These motifs were endlessly repeated, on multiple supports in the underground and in the streets, painting directly onto road vehicles, buildings, objects and tarpaulin panels. His work moved effortlessly from the urban environment to museums, galleries and private collections.
Sweet revenge for someone who was regularly arrested for the destruction of public property.
Synthetic repetition of symbols in thick black lines tell an unending story of yelping dogs, snakes, contortionists, televisions, pyramids and flying saucers, depicting modern man as a being confronted by impulsions and contradictions.
His art is joyous, fresh, accessible, but also has depth and is charged with emotion. These pictograms would invade New York, Europe and the world. Keith Haring became one of the most popular artists at the end of the 20th century.
After his first official exhibition at the Tony Shafrazi Gallery in New York in 1982, Keith Haring produced his famous triptych for the Montreux Jazz Festival 83 by invitation of Pierre Keller. His dancing figures would become icons of his art together with other pictograms which he would constantly use. The Montreux Jazz Festival posters were silkscreen printed in 1983 by Albin Uldry in Bern.
From 1984 he exhibited around Europe, in Germany, at the Venise Biennale and in Milan. Haring created posters for each of these exhibitions. He participated in performances with friends from the Free Figuration movement, such as Robert Combas. Hervé di Rosa, Remi Blanchard and Francois Boisrond.  He painted large scale frescoes the world over.
Frankfurt, Rio… the exhibitions continued. Keith Haring also participated in important art fairs and museum exhibits
Always eager to please the public and to make his art accessible to all, he opened his Pop Shop in Soho in 1986 and began selling a huge quantity of derived products at very affordable prices. He received much hostile criticism for this move from artistic circles but was supported by Andy Warhol and Yoko Ono.
At the invitation of Pierre Keller in 1987, he created a new triptych for Lucky Strike in Switzerland which was printed using silk-screen by Albin Uldry.
The 1rst August 1991, The Swiss National Day, poster was printed after his death.
Politically committed, Keith Haring never stopped fighting against racism, for gay rights and humanitarian action. He produced numerous posters to further these causes. One of the most famous is 'Free South Africa', a poster in which an African baby is chained. His poster in collaboration with Andy Warhol, Roy Lichtenstein, Jean-Michel Basquiat and Yoko Ono, entitled 'Rain Dance' is another one of his well-known humanitarian posters.
In 1998 he learned that he was infected with AIDS. He started designing a large amount of posters to support the fight against AIDS such as 'Ignorance = Fear, Silence = Death – Fight AIDS – Act Up'.
In 1989 he created a foundation in favour of children with AIDS.
Life, death and sex are omnipresent in his art. He died on the 16th of February 1990, as a result of his illness at the age of 31 only.

All of our posters are sold with their original certificate of authenticity and are guaranteed original first prints. 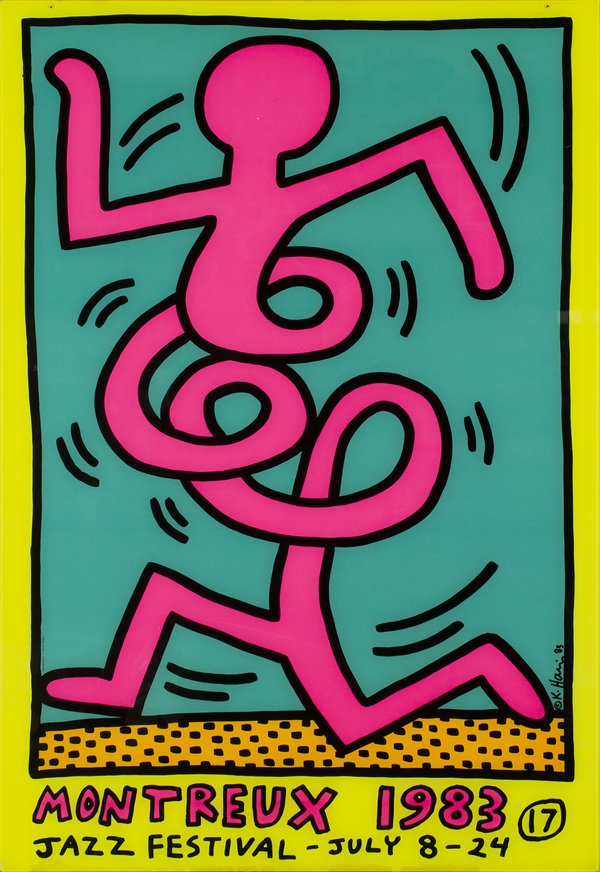 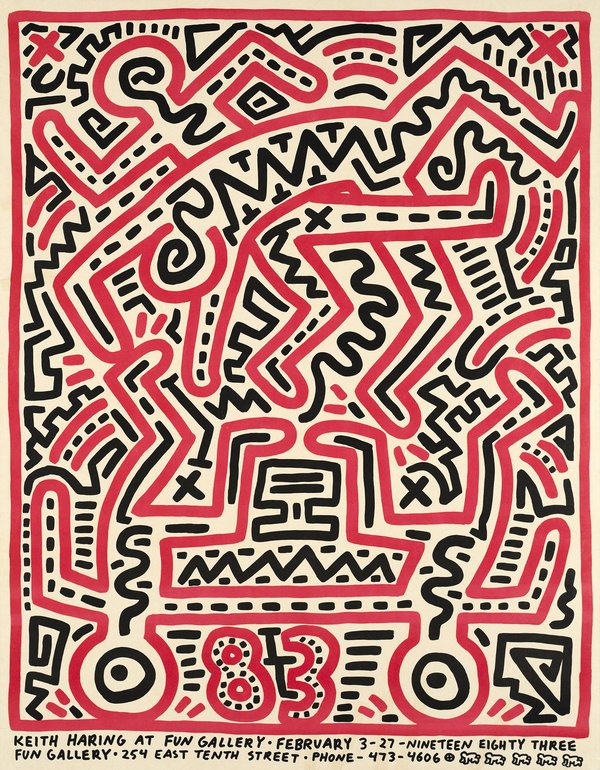 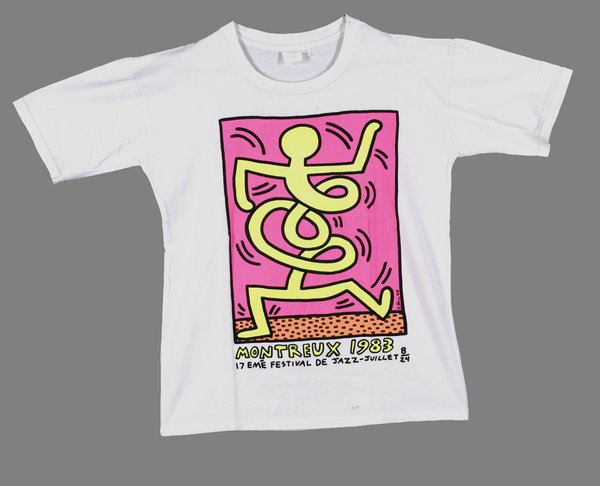 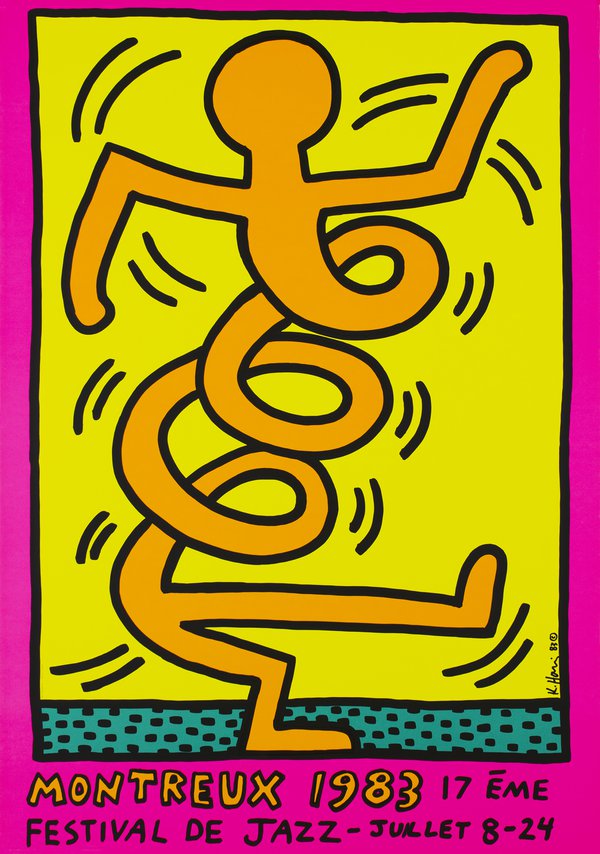 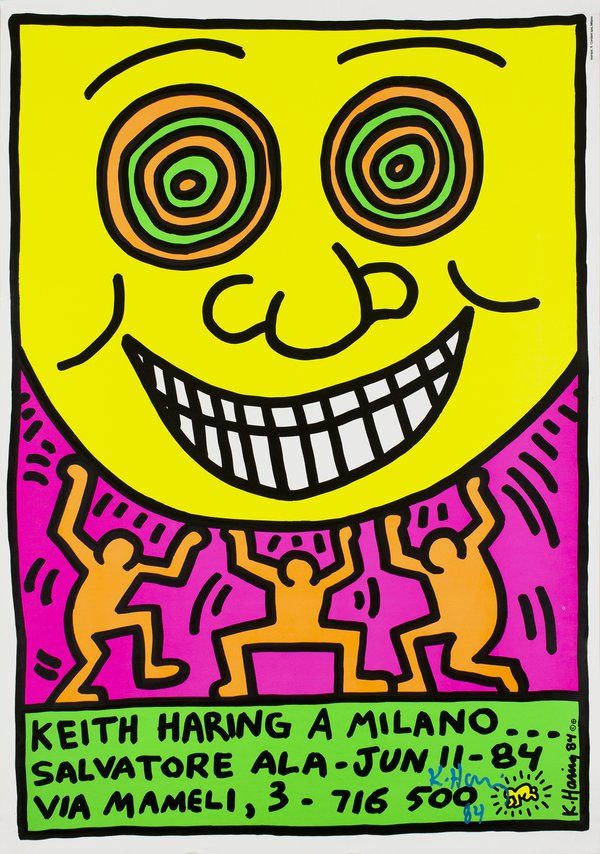 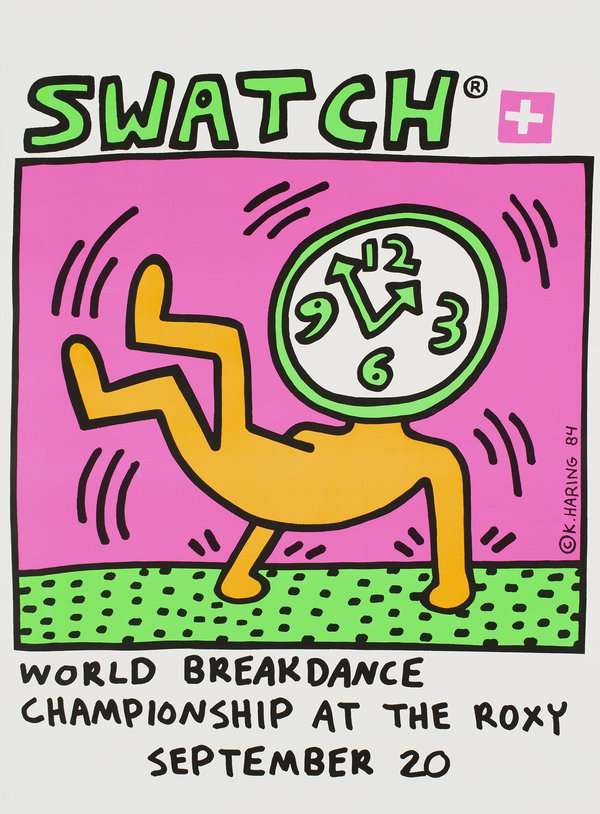 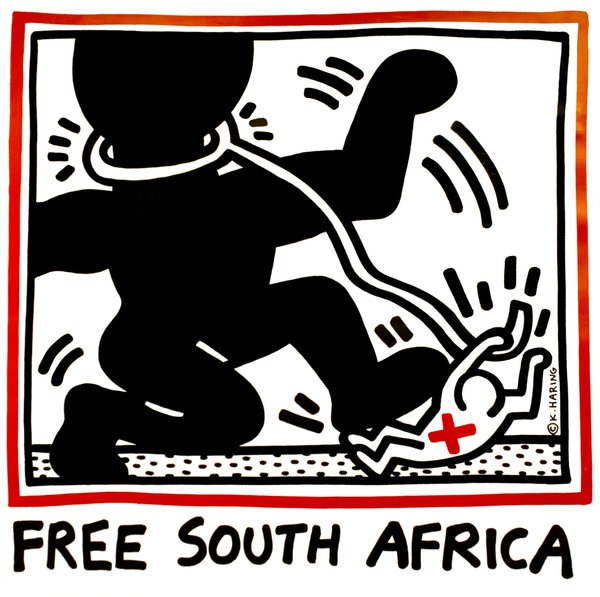 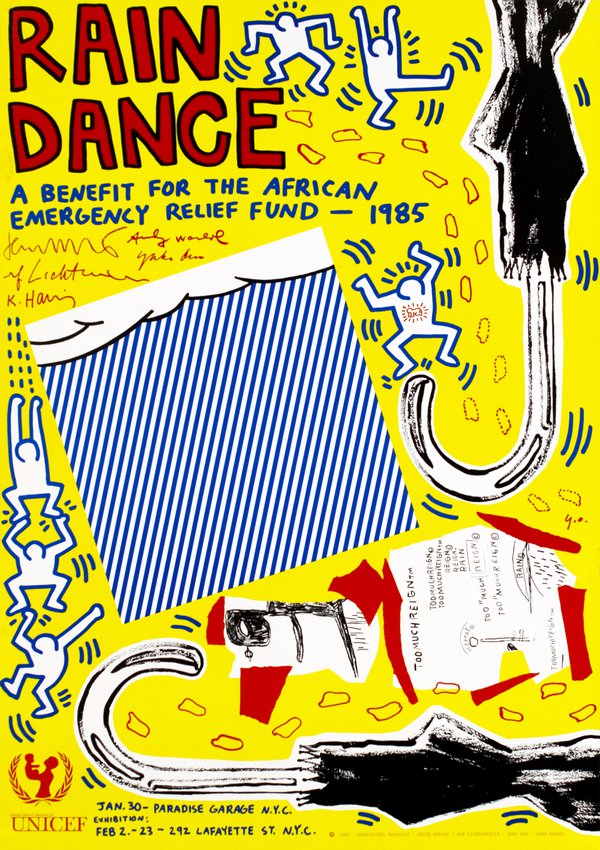 Rain Dance, a benefit for the african emergency relief fund - 1985 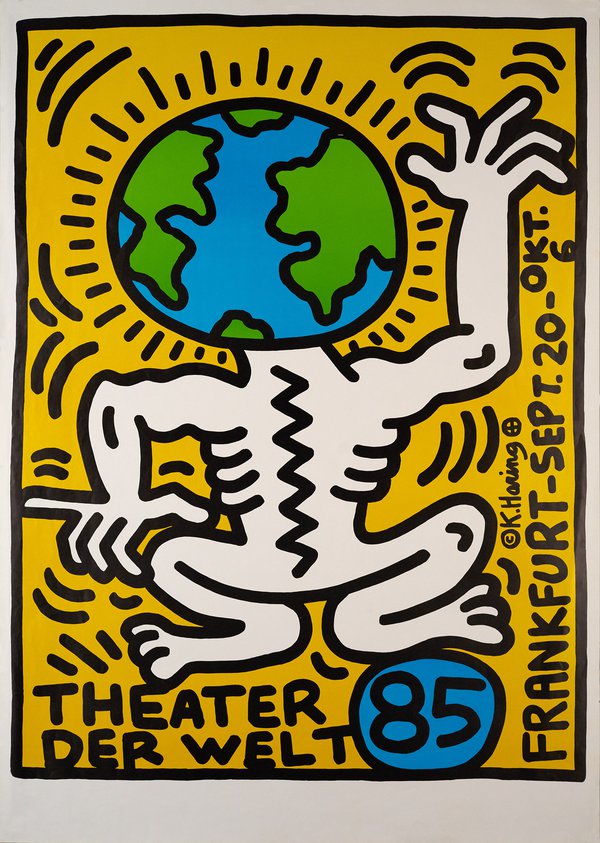 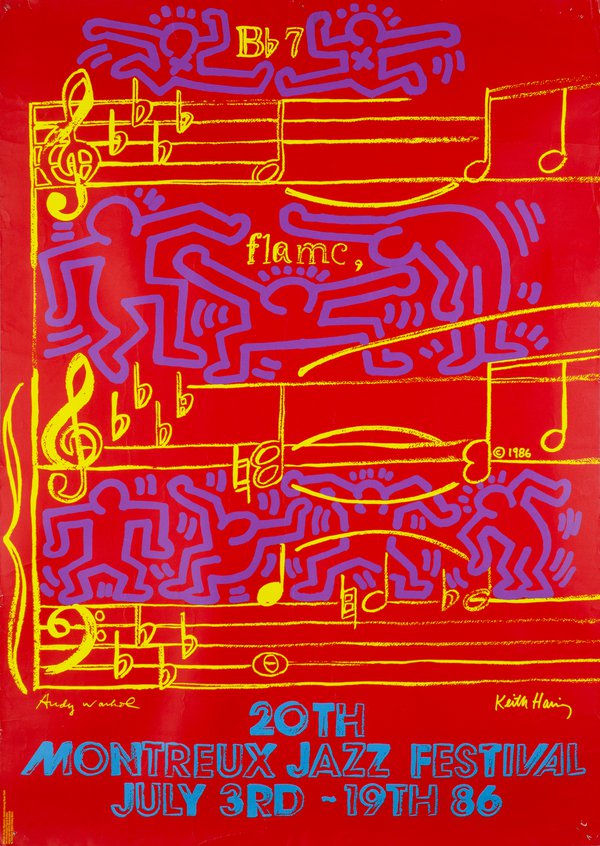 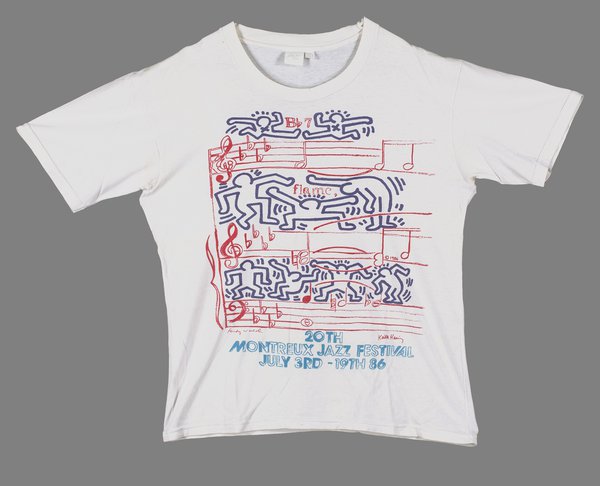 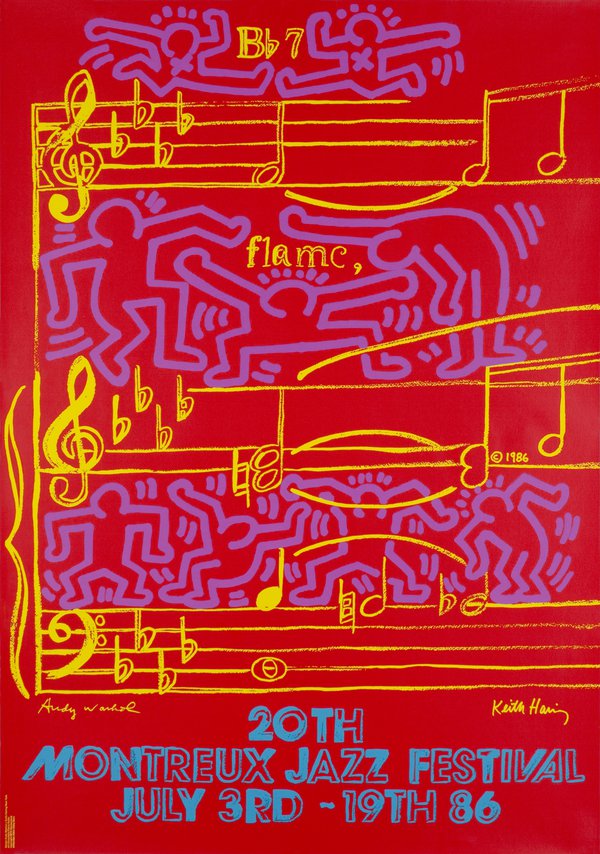 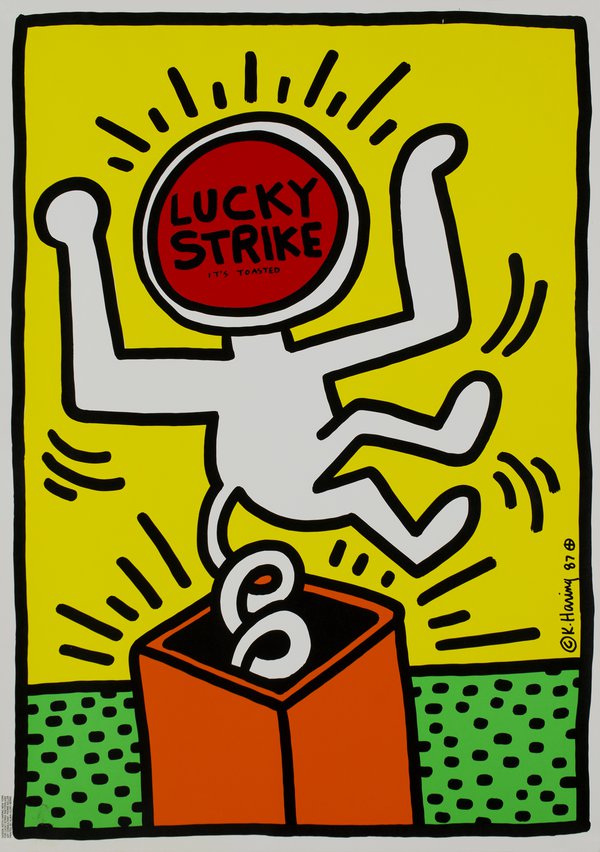 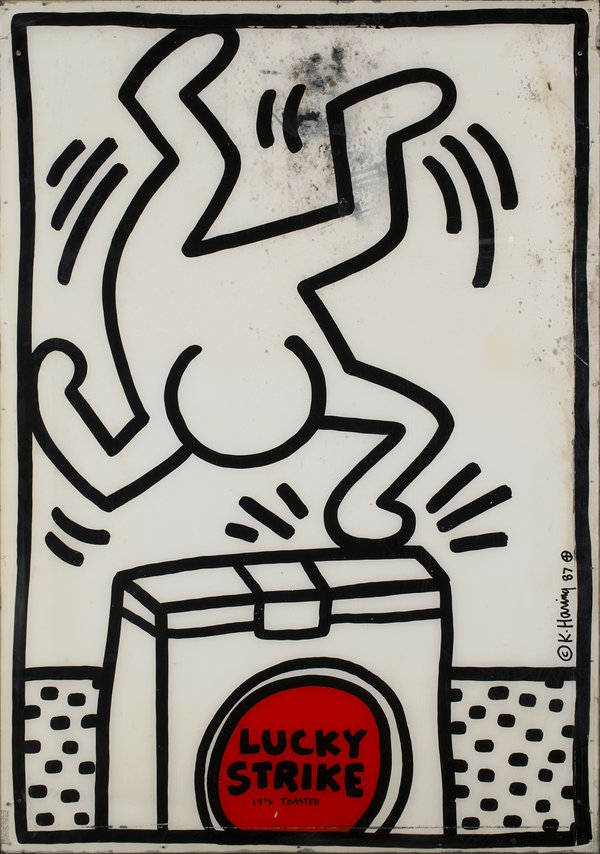 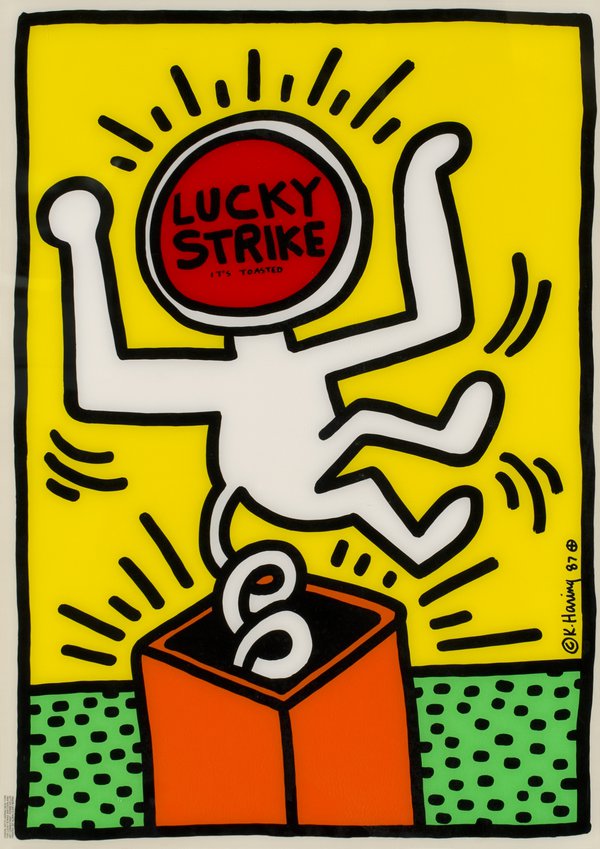 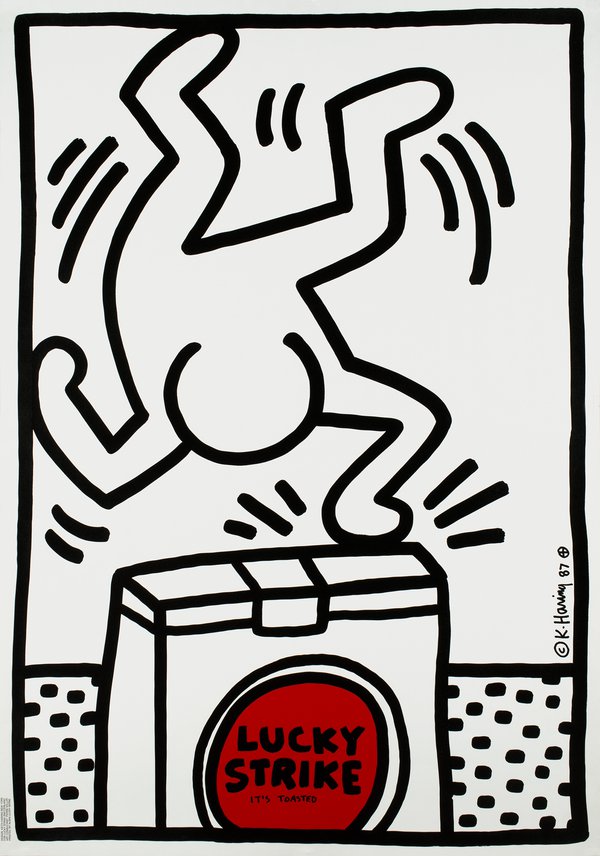 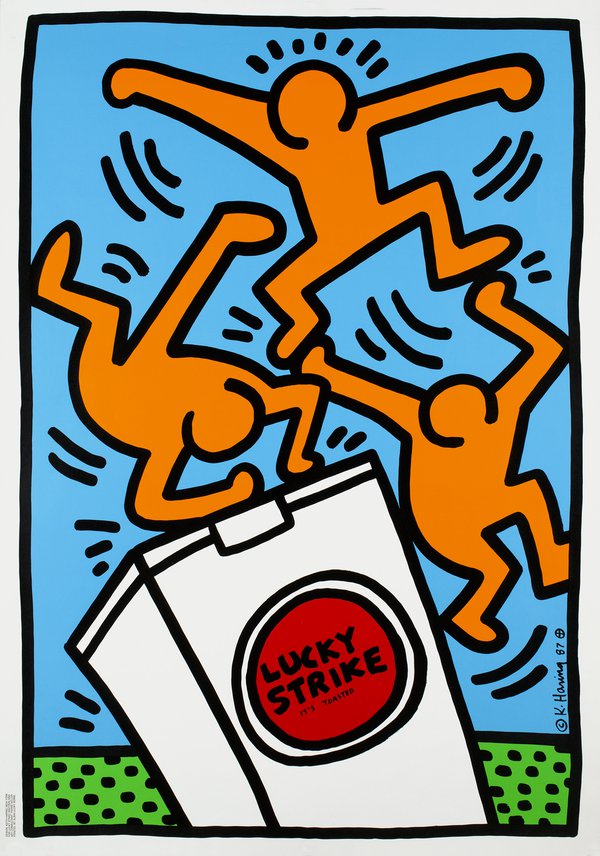 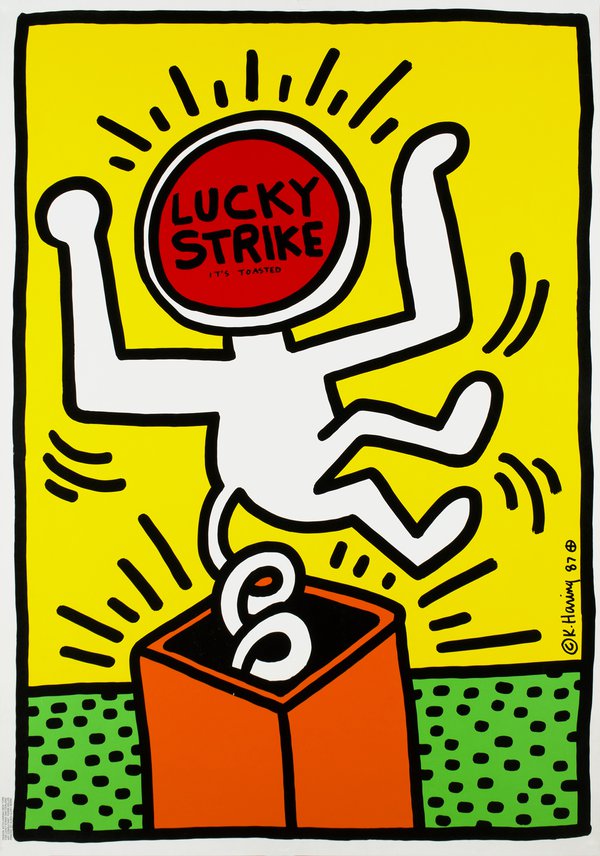 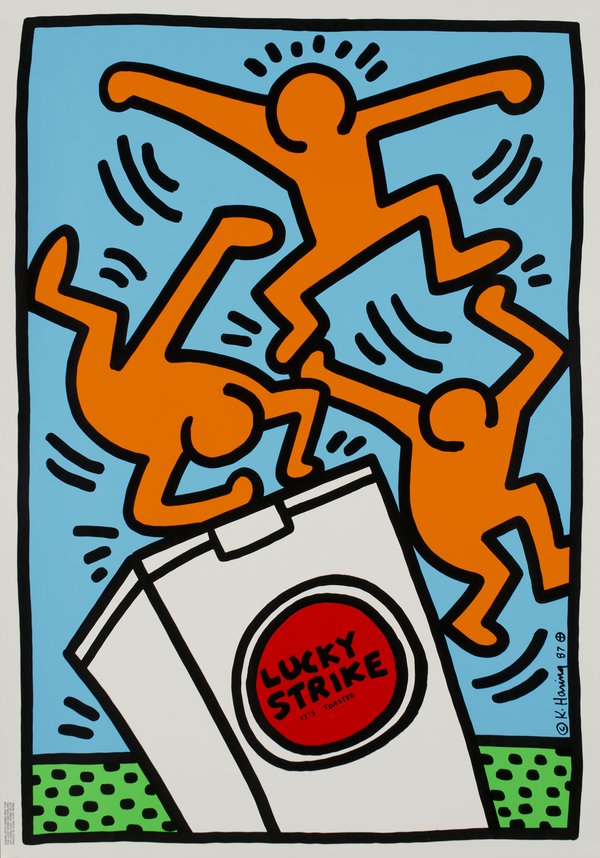 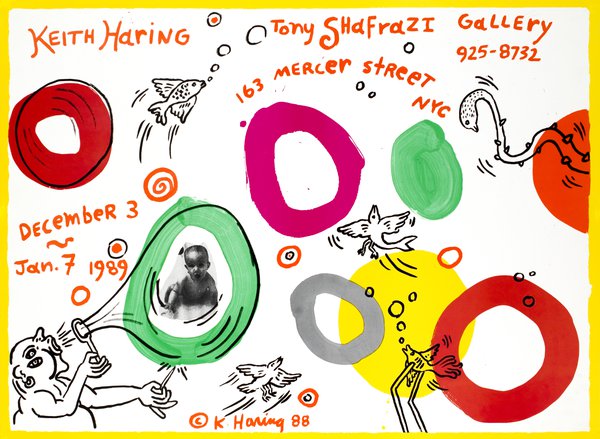 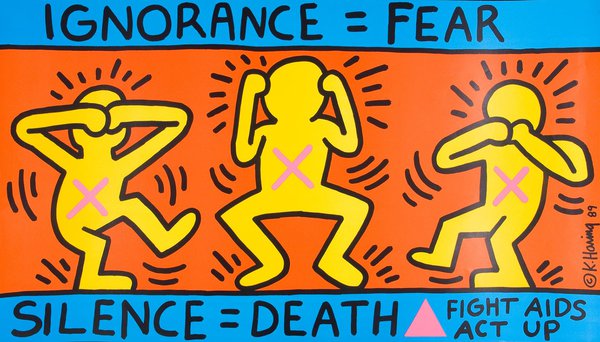 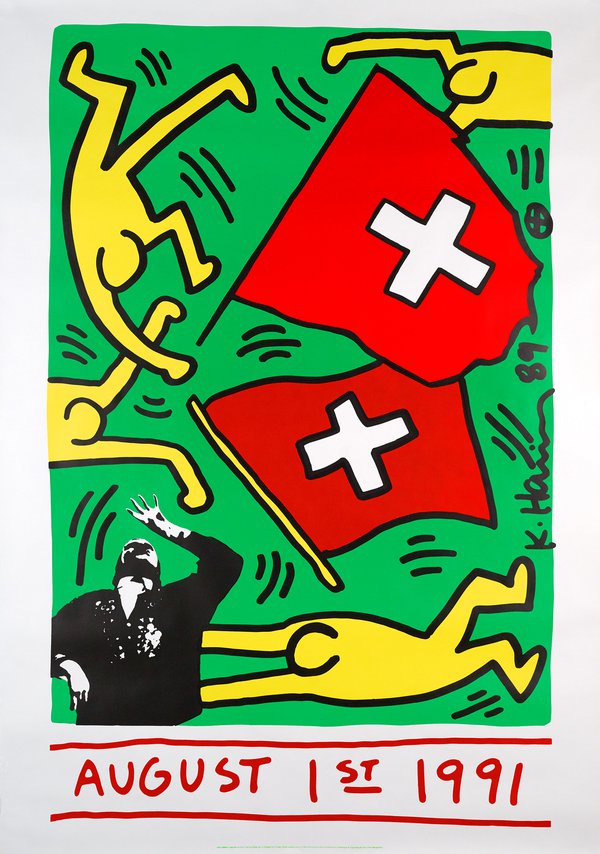 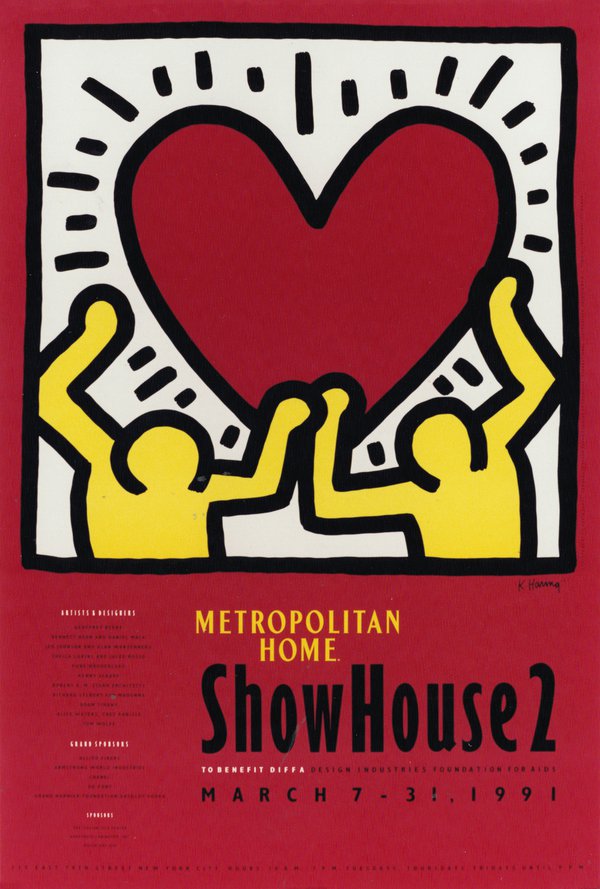 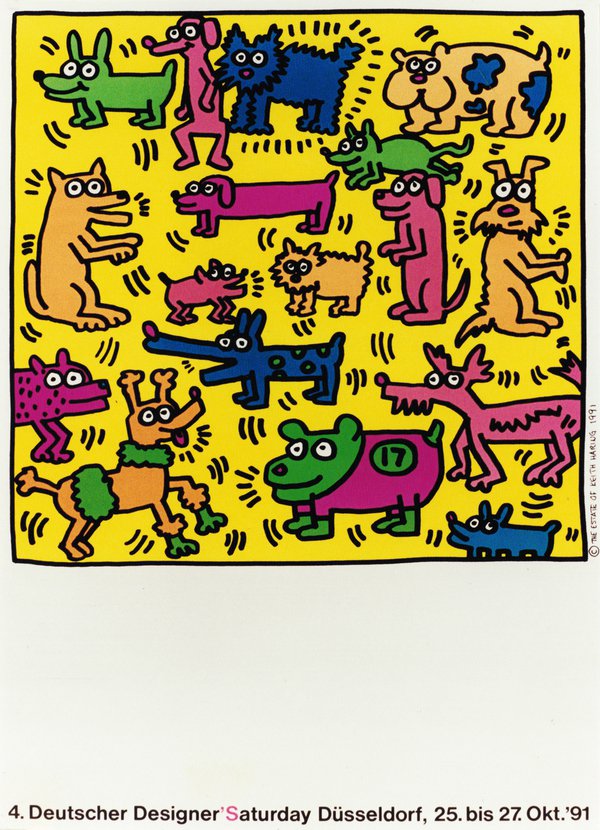 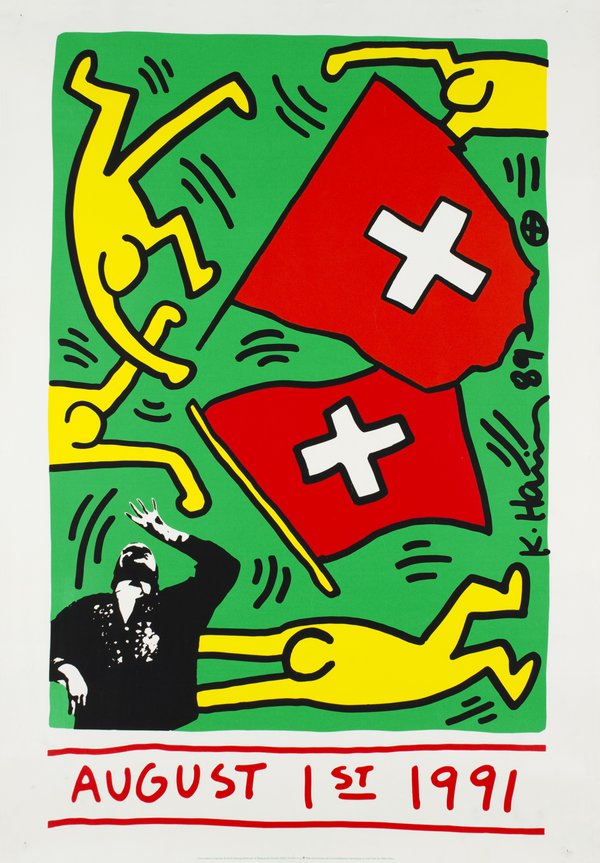 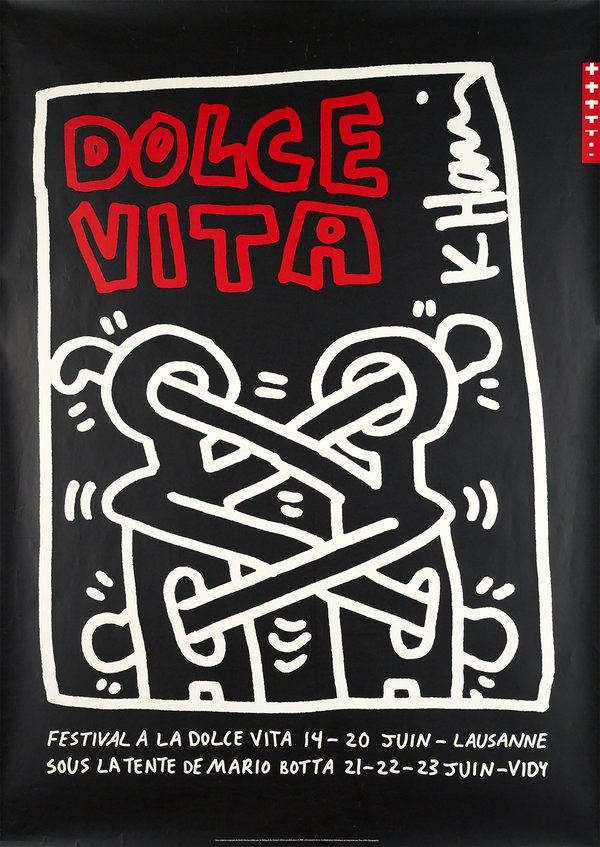 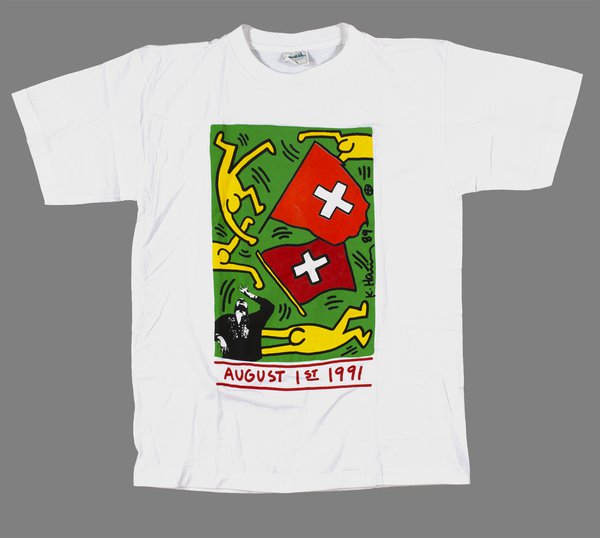 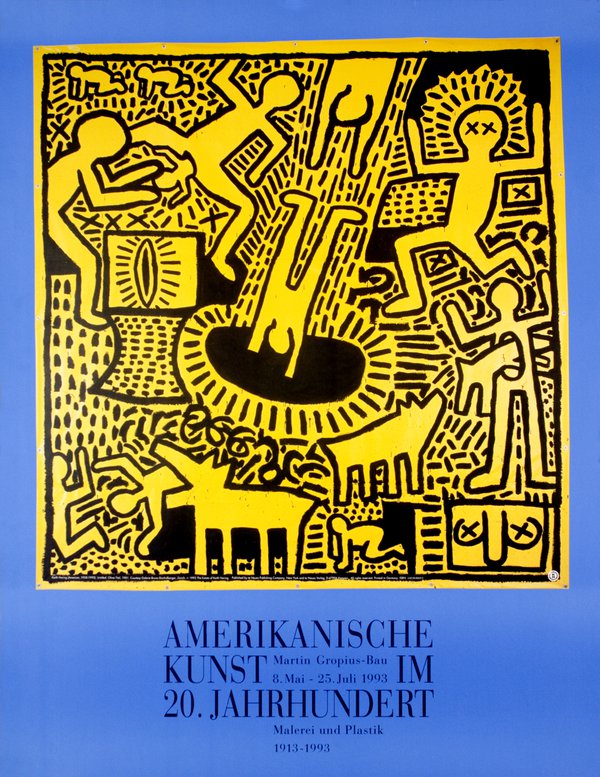 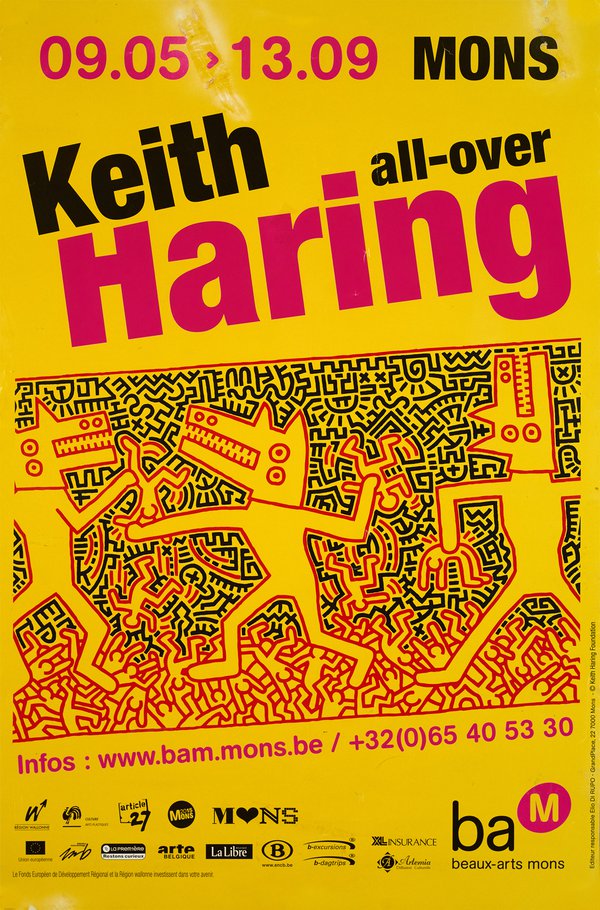